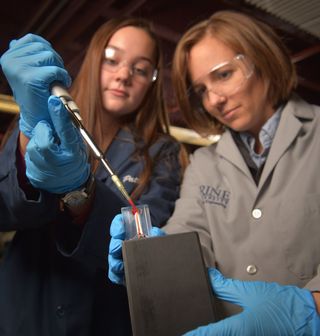 How would you describe Blaire Biomedical?

I invented the SmartMed case and founded Blaire Biomedical with a vision of helping people who may be suffering chronically from long-term illnesses, empowering them with handheld medical technologies that give them the opportunity to test their blood anywhere at any time.

SmartMed attaches to your cell phone, and with one drop of blood in real time we’ve been able to acquire blood count results with it. Imagine not having to go to a hospital to have your blood drawn, doing it all from the comfort of home.

That’s a big freedom, because what does that do? It reduces your risk of acquiring illnesses, because hospitals tend to be places where there are germs — lots of germs. And so if you can reduce the risk from those patients entering the hospital, then you can reduce their chances of acquiring something. And you can also increase their testing frequency.

Where did you get the idea for the device?

I’m a biomedical engineer at Trine University and also a mother of two children. My youngest daughter having what’s considered a terminal illness, and she’s very well, now, by the way.

She was born with a condition called Trisomy 18, which is also known as Edwards’ Syndrome. It meant that she was most likely going to have a plethora of underlying congenital conditions. She was born with holes in her heart and a whole bunch of other things that were issues.

I was living in Longview, Texas at the time, which is a 4 ½-hour drive away from Texas Children’s Hospital based in Houston, and she was not doing well. Her heart was having heart failure; she was on medication.

She was nine weeks old when she had open heart surgery. When she was 14 months old, we found a pediatric form of liver cancer — two tumors in her liver. We were going every week, sometimes twice a week.

Hospitals are places where patients can acquire illnesses, especially if their immune system is weakened, and she ended up getting pneumonia.

I remember being in the elevator there thinking, “all right, I’m going to do this; I’m going to make a difference.” With my research background in cardiovascular fluid mechanics, I’m trained, this is what I do. So, I got the idea for the SmartMed case because I didn’t want my daughter to keep coming back into a hospital setting.

I studied how platelets move and interact with one another and developed a device that’s a case that attaches to the back of one’s cell phone.

With this case, you take one drop of blood and put it on a cartridge. Say I was to use the same kind of lance like you would for a blood glucometer if you were diabetic. With that one drop of blood, you take the cartridge and slide it into the back of the phone case. It lines up.

You use your smartphone and of course you have your camera and flash, so within this case that’s specialized, you slide this in and then I have a lot of proprietary technology within the case and through the use of an app that we have developed, we’re able to provide diagnostic blood results.

We don’t mess with the camera. The phone itself is not messed with because that is a proprietary device with all of its technology. We just use what it already does. We have an iOS software platform and also an Android platform. The idea is, this would be for any phone or iPad.

How did you come to northeast Indiana and then start this business?

I was attracted to Trine University’s Innovation One Center and of course their brand new biomedical engineering program. It was a very unique combination to have an Innovation Center in the same building as the Biomedical Department. I couldn’t find anything like it; I thought it was a great opportunity.

They had a job opening. I applied. And so they offered me a position, and I was happy to accept. I started out as an assistant professor of biomedical engineering and I was promoted this past year to associate professor.

The project has been ongoing for the last four years; I’ve been at Trine for the last three. I came here, and Trine has been very gracious to me and we have worked together, to, first of all, give the students a project to work on, but also to advance the technology. I’m working with Trine through a potential partnership.

The Department of Biomedical Engineering at Trine has graciously funded the project with $500 each year for the last three years. It is a small fund, but if you’re fastidious, savvy, you can make wonderful things happen on just a few dollars.

Is there any advice that you have found particularly helpful in the whole journey of developing the device and getting a business started with it?

I’ve heard a lot of great things over these past few years, especially since I got started with Robert Clark and Steve Franks at the Fortitude Fund.

Innovation with execution is so important. I preach that to my students and emphasize, “never give up; keep going,” because I was feeling like giving up at times.

I’ve met with investors and VCs (venture capitalists) already and I’ve been told, “no,” or “come back, sounds great, come see me when you’re further along.” You just have to keep going, even though you don’t have a dime. You just have to do what you have to do to keep moving forward.

Are there any moments so far in the startup of this business that stand out as particular achievements or breakthroughs?

Being in the lab and realizing, “It works, oh my god, it works!” We were waiting for the results to pop up on the screen and we’re tense and we’re nervous and the results come up and we see that the cells are being sorted and we can count them and, oh my goodness, it’s at 88 percent accuracy, and we’re getting results. That was amazing.

Over the last year we had had a good feeling that it was working, but we weren’t able to statistically prove it yet. In science, you have to prove with statistics that it’s working, And the statistics came back and the numbers said it works and so we were able to prove it.

The students and I wrote a manuscript about it and we’re in the process of submitting the manuscript for publication, so that’s really cool.

Because I’m also an educator, I love seeing the ideas come about. More than just being an educator and an innovator, I love seeing like, just the lights go on in my students’ eyes. So, I get to talk about my entrepreneurial experiences and I get to see their light bulbs go on. Hopefully on my epithet when I die it will say she was a great teacher and she helped us.

So, if I’m able to create a medical device that helps people and my students get motivated because they’ve been a part of something and they create medical devices, that’s what I love about being an entrepreneur, is making it and also mentoring.

What is ahead for Blaire Biomedical?

I have a working prototype with 88 percent accuracy, but if I want to compete with the legacy devices that are in hospitals, of course I’d have to be over 99 percent accurate, so I’m working on the product development to get up to that level.

One of the most confounding things to me as a mom of a patient who’s chronically ill is that we do blood glucose tests at home and people have been doing that for decades. So why can’t we test our blood for other things?

I would love to be able to wrap up the research and development and secure a good portion of seed funding for Blaire Biomedical and I’d love to get a Series A offering done. But I am leaning toward licensing this for us as an exit. Now, that could be a year out; that could be three years out. But here’s the goal: I am highly motivated to see the device hit the market space. People need it.

If you think, “alright, how can we really make an impact on the world, not just here in the U.S. or first world nations, but in developing nations, the big impact, big picture, which is a long way off maybe, but hopefully not too far away,” will it be a robust medical device that could be in the pocket of physicians in the Physicians Without Boarders medical relief nonprofit?

So, they’re somewhere in war-torn Syria, for example, and they pull out a case and they have a bunch of these little cartridges and in real time they’re able to test people’s blood.